Skip to content
My Wembley day out – A disabled Supporters perspective

My Wembley day out – A disabled Supporters perspective

As a Tranmere fan and sports lover, I had been hoping and looking forward to my return to Wembley this year – with a better outcome. 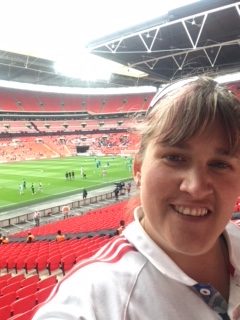 We arrived at Wembley Stadium Station and made our way to the stadium. When we arrived, we were met by security staff on the peripheral.  They were not so helpful as I was on crutches and had nowhere to put my bag for a bag search.

We made our way into the ground early to avoid queues and crowds. Having Cerebral Palsy, I struggle in crowds and adding crutches in the mix was a worry.  A “ Happy To Help” person met me at the turnstiles and showed me through the disabled entrance – we had our tickets checked (I had a friend with me to help me on the train not at the game as I like to be as independent as possible). We then proceeded to yet another security station and this was when it all went downhill. We both had rucksacks, mine had 2 bottles of unopened pop, biscuits, and sweets along with a water bottle half full of orange squash. After being asked what the biscuits and sweets were (answer Biscuits and sweets!) he turned to the bottles of unopened pop, it became apparent quickly that bottles were a problem but the bottle of squash (that could have been anything) was fine. All the bottles had lids, but it was only the lids on the pop which was the problem.

I was told that I would need to transfer the pop into flimsy plastic cups, but with only one hand that works plus crutches in them both, that was not feasible.  I requested that the lids could stay as a reasonable adjustment but I was told NO even though its fine at concerts and other high-profile events that I regularly attend. I tried to explain that the cups would not work and asked how I would hold them, use my crutches and move at the same time. The head security guard (Jo?) was becoming more aggressive, I wanted her to understand that she needed to acknowledge the situation I am in and address it but she was not interested. After several minutes and several bag search questions by other security staff (which were not needed and over the top as we already had our blue tags on our bags), the head security lady was not prepared to talk on the same level as me to find a suitable situation. It was very apparent that no staff especially the security staff knows about the Equality Act 2010 and the idea of a reasonable adjustment.  It made me feel like a second-class citizen and my requirements and views were not considered or met.

We had lids taken off and this was the result within 10 mins –  as I expected and tried to explain would happen. (never give someone with Cerebral Palsy an opened bottle!)

Finally, we made our way to my “accessible seats”, after over 1 hr on hold on the Tuesday before for tickets I got through and requested accessible seats, no steps and seats at the end of the row so I don’t get overwhelmed by people and have space for my leg when it goes into spasm and cramp.

My seat block 127 rows 31 seats 115-116 are certainly not anything I requested  5-6 steps and middle of a row!  My friend was livid but after the security issues, I half expected it.   Thankfully the staff on the seating area were more understanding and helpful and moved me after discussing it with stadium officials. This should never have happened – what is the point of having an accessible ticket line if they don’t meet the basic need of a supporter??

I feel that the FA, Wembley stadium are not meeting the basic needs of their disabled supporters and front-facing staff should have the training and fully understand the impact a disability can play on a person’s experiences as it should be the most memorable day – not full of negative experiences as mine was – apart from the result!

Having an unacceptable response from the stadium I contacted the FA and Football for All and I am pleased to say that I have been given an apology and they acknowledged that the standard of service was not up to standard and the security staff will be given extra training. They also acknowledged that my seats were not accessible.